Celebrities and Sightseeing: A Two-Hour Adventure in NYC

We stepped out of a car in front of The Jane Hotel and directly into the path of a television personality. 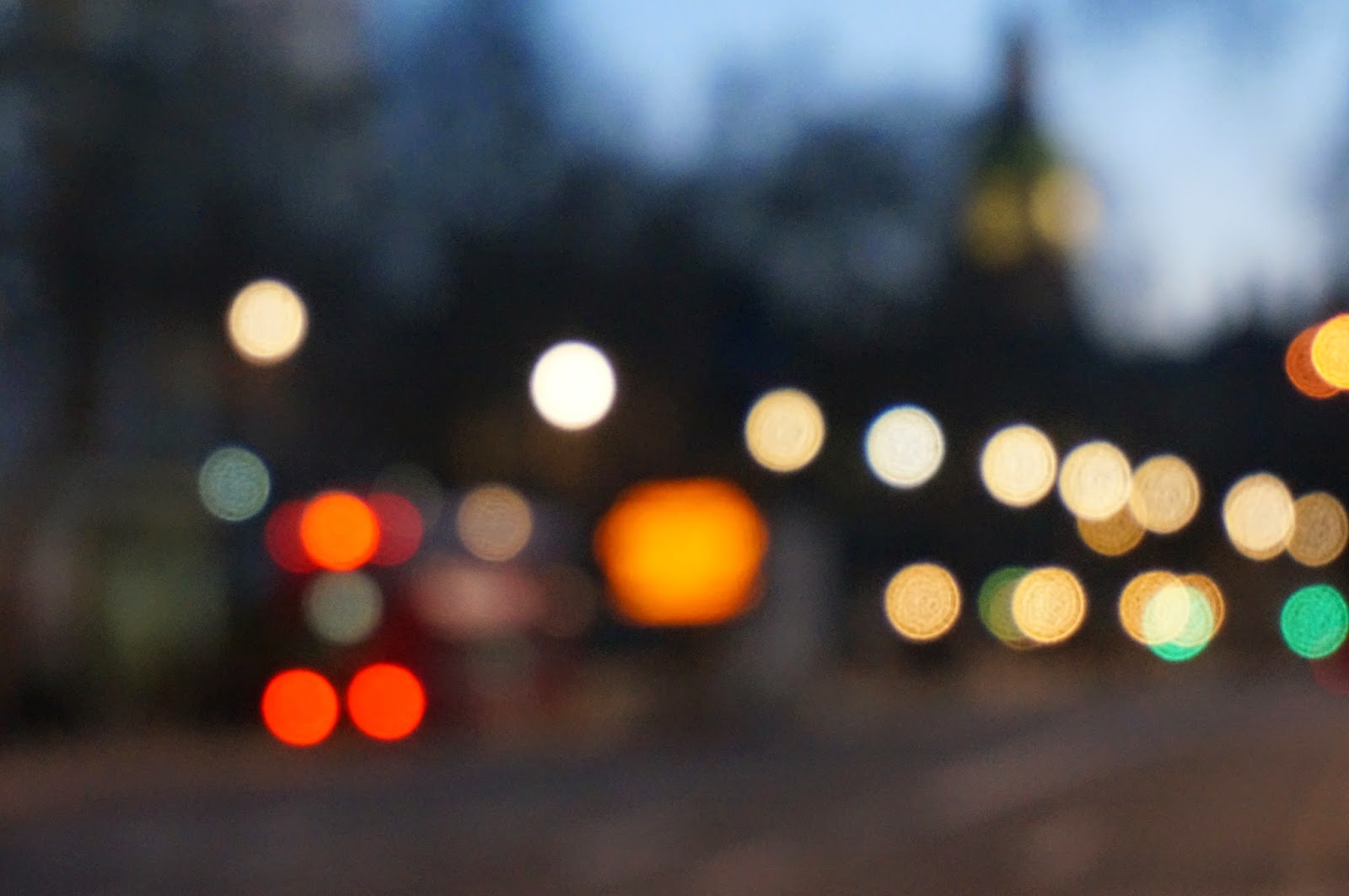 Bumping headlong into America's Next Top Model's Nigel Barker wasn't a bad way to begin a mini-tour of New York City in the middle of a rain storm. The family that had invited me to guide them on a Manhattan walk that morning smiled through layers of much-needed rain gear - despite the weather we were off to a great start! 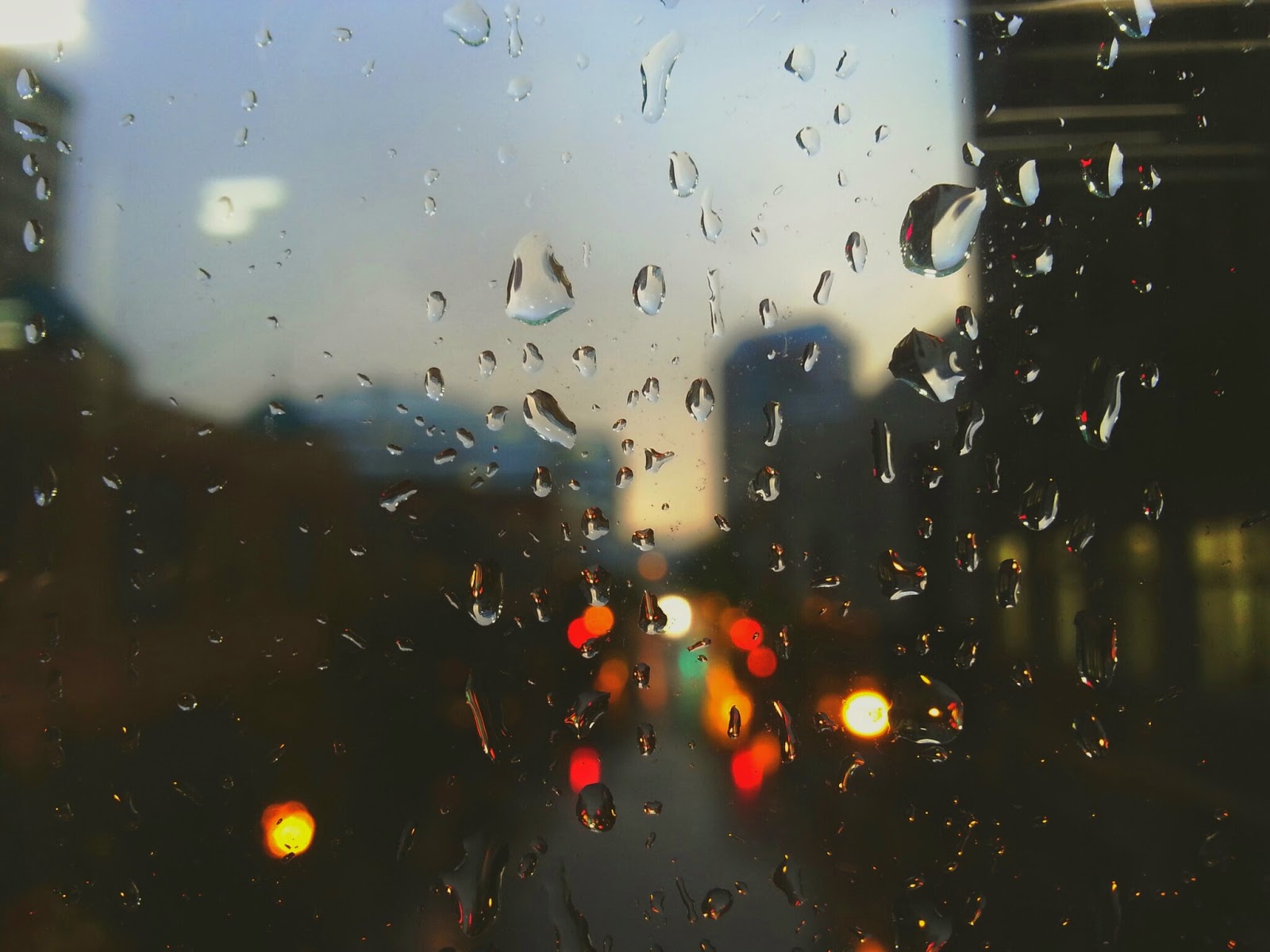 In a short time we covered plenty of territory - we toured The Jane's landmark interiors, walked the High Line where we paused to watch a class led by The Taoist Tai Chi Society, snacked our way through Chelsea Market and walked west toward Madison Square Garden to catch the IRT Uptown Local. 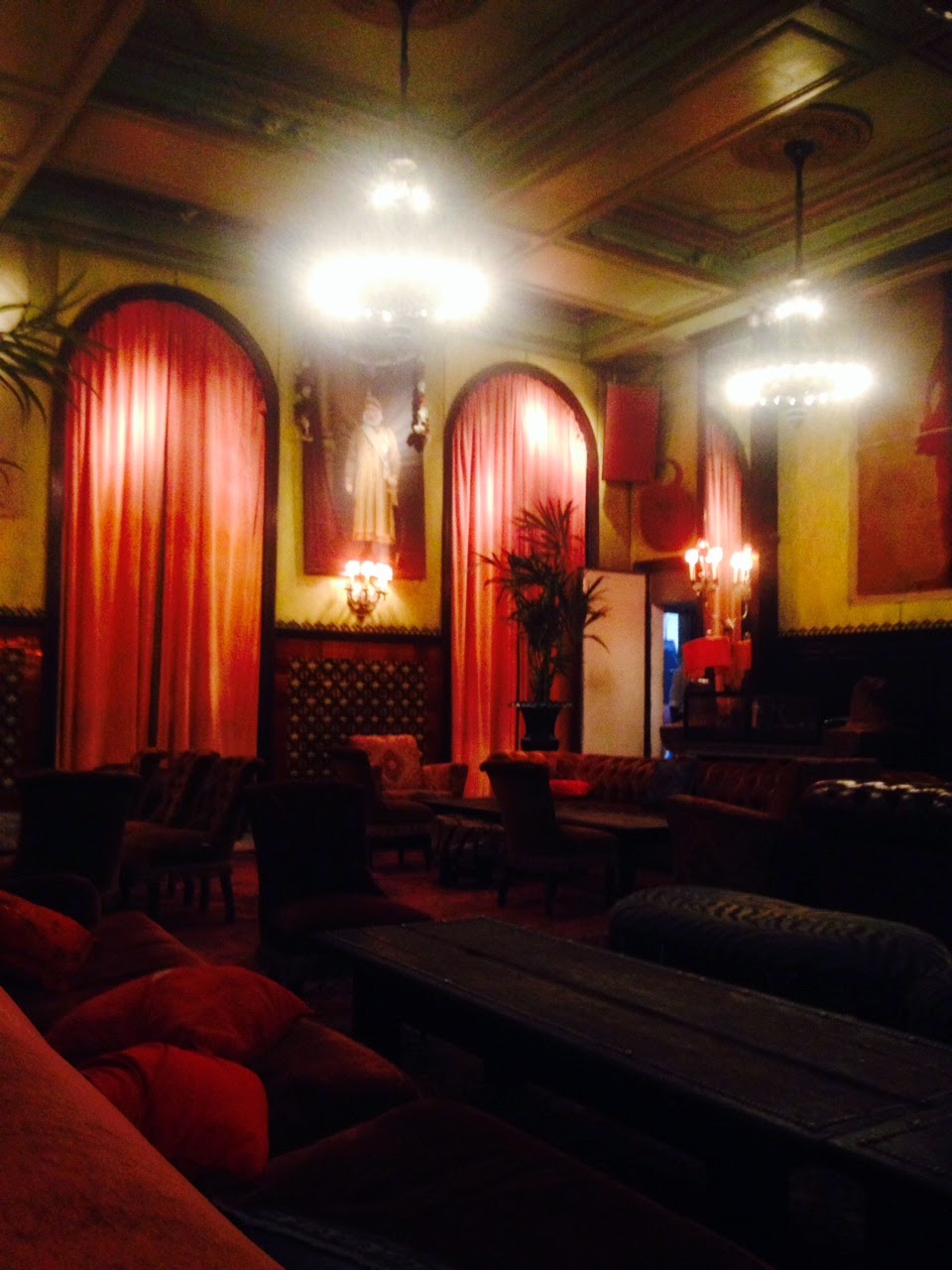 Once uptown we gazed out at a misty Columbus Circle view from The Time Warner Center's balcony - a panorama familiar to Anderson Cooper 360 fans.

We browsed The Museum of Arts and Design's treasure-filled gift shop. 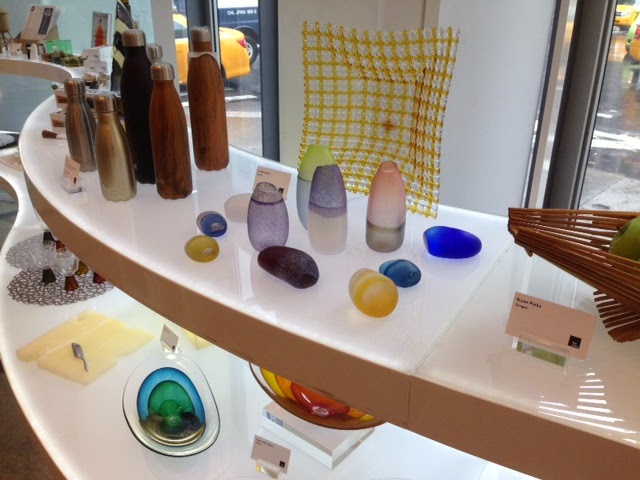 We rode the museum's elevator - catching glimpses of exhibits on each floor - to Robert, the restaurant with penthouse-level views of the Upper West Side. There we caught sight of yellow taxis and red brake lights streaming north along a stretch of Broadway. Gray skies made Central Park's tree canopy appear to glow neon to the east. 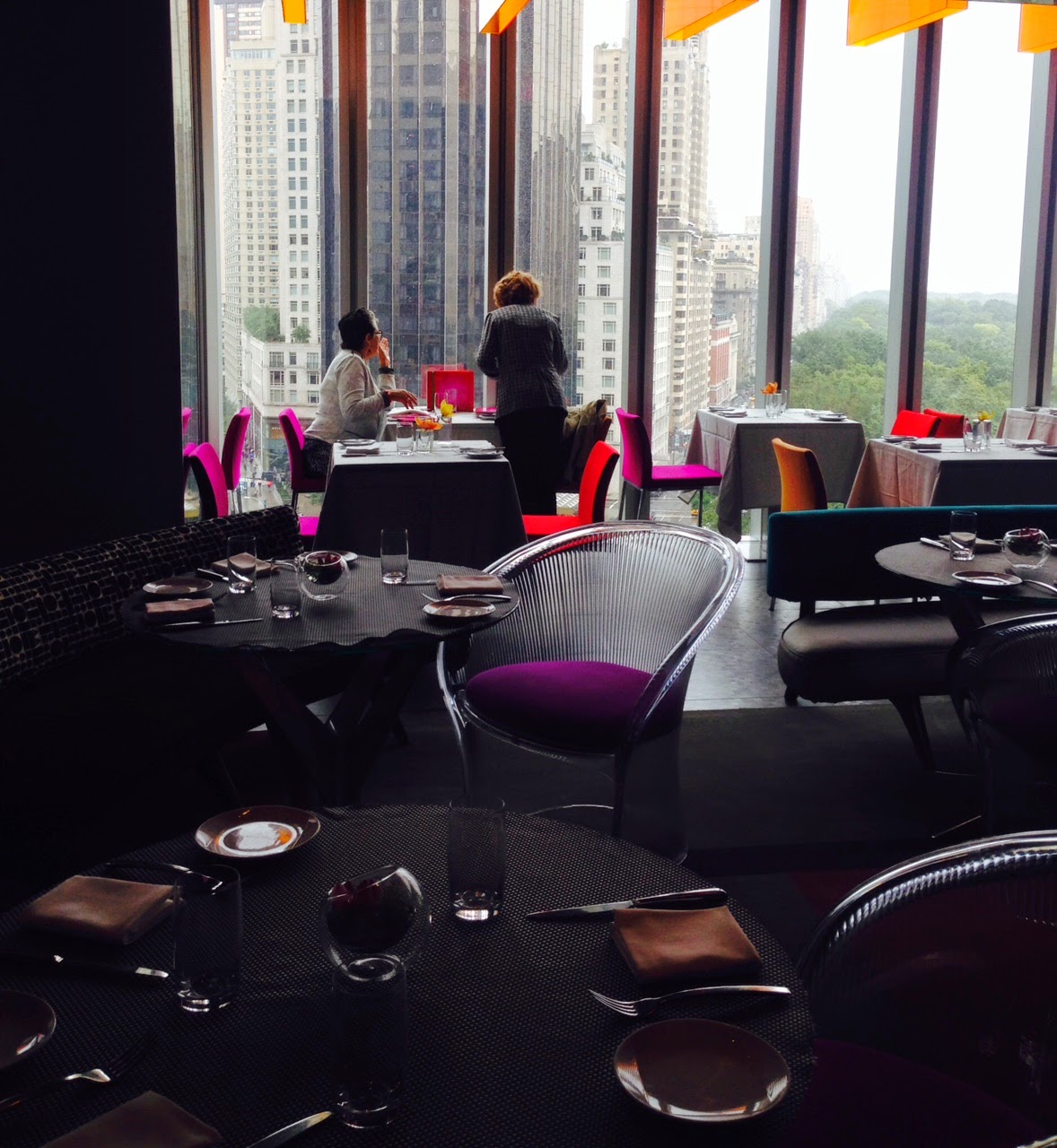 Next we walked Central Park South, passing the U.N. dignitaries, secret service agents and black SUVs with diplomatic plates that paused in front of each hotel . A man in foreign military garb adorned with medals, stripes and gold braid stood momentarily carefree in the light rain. He rested his open umbrella on one sturdy shoulder, twirling it. Another man hurried across our path under a transparent 1970s-style bubble umbrella. His two French Bull Dogs lead the way. Each pet wore a polka-dot raincoat. 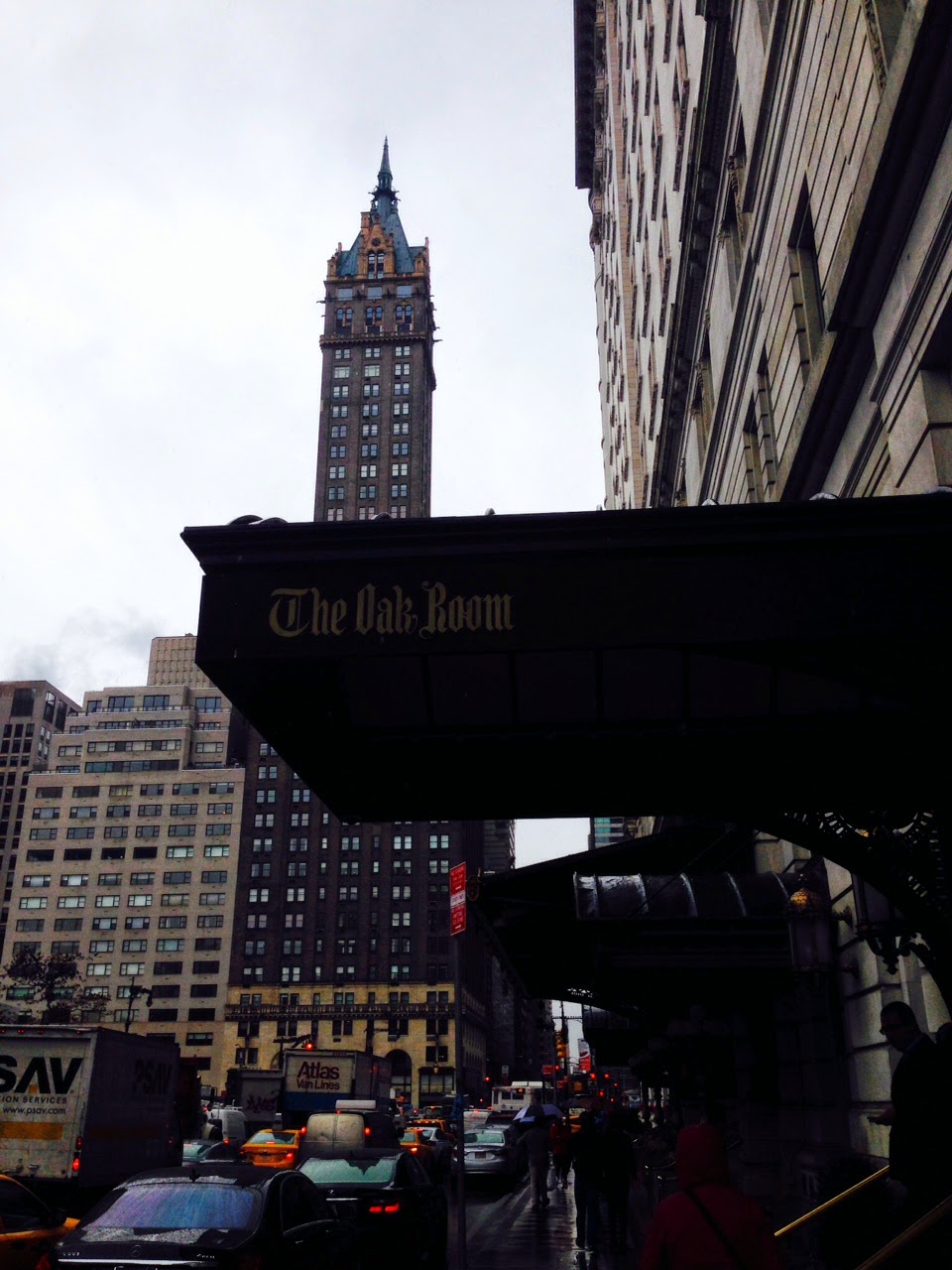 It was a typical midweek Manhattan morning - eye candy in every color and flavor everywhere you looked. My friends have spent many days in New York. I've spent many years. It didn't matter - we were both loving the flow and buzz of the city in the same way. The thrill of New York never fades.

By the time we'd reached our destination - a relative's beautiful office at the General Motors building - we'd enjoyed two hours of non-stop activity and were ready to rest and enjoy a good visit. What we found was yet another thrilling moment. There's nothing better than a New York-style surprise! 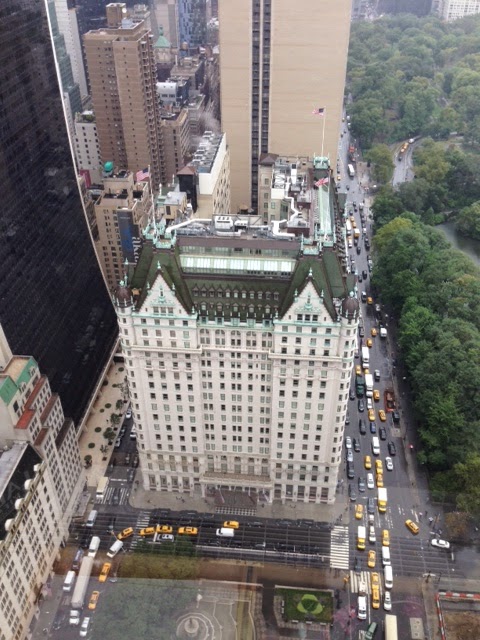 It was this - a birds-eye view of some of the most iconic hotels in Manhattan - The Plaza, The Pierre and The Sherry Netherland. 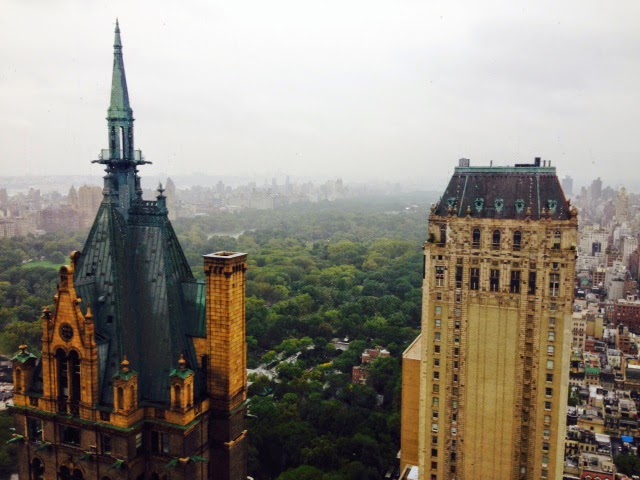 I'd always imagined that the top floor of the Sherry Netherland housed a grand apartment, maybe one with a ballroom and an enormous fireplace. Instead I discovered that below the building's looming spire stands a more humble New York classic - a wooden water tower. 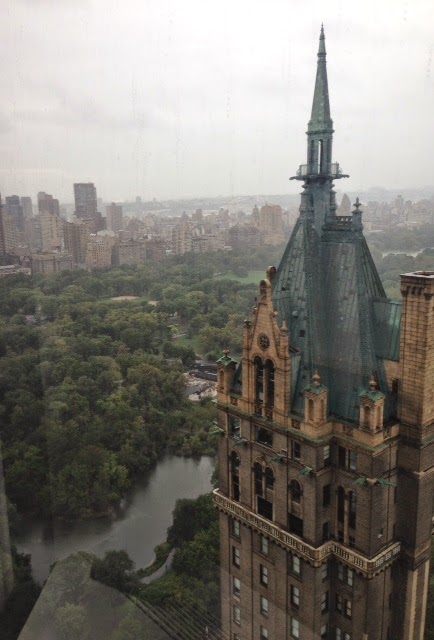 Only a few stories below the Sherry Netherland's water tower and line of gargoyles we noticed a wrap-around balcony. It surrounds a seven-bedroom apartment that can be yours for $95 million! You can browse all of the apartments that are currently available for sale in the building here.

We started the day with a surprise - a television star - and a stop inside a beautiful boutique hotel. We ended the day surrounded by architectural celebrities - gorgeous hunks of New York masonry - and an epic view of the city's hotel super stars. It was the highlight of the day - one we'll never forget.

For more NYC posts and images plus links to some of the brightest travel spots around the world, follow me on Twitter and Instagram @citygirlwrites. Looking for a guide who can help you explore NYC and Philadelphia? Reach out to me at maria@citygirlwrites.com.

Posted by CityGirlWrites at 7:30 PM