The Last Candy Store in NYC 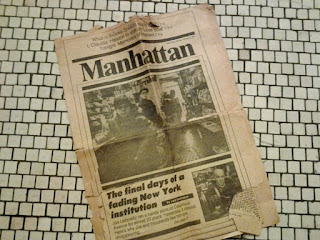 If you grew up on New York's Upper West Side in the 1970s, there is a name that might bring you back to good memories of your old neighborhood and a New York that is long gone: Joe's Candy Store.

A chain store now stands at the corner of West 75th Street and Columbus Avenue where Joe's commanded the block for almost three decades. Peel back the years, tear up the floors and strip away the many coats of paint, wallboard and fixtures and you might see what this little storefront was like thirty years ago.

Everyone made a stop at Joe Leibowitz's candy store at least once a day and everyone left with a lot more than just a sweet snack. It was the place to rush into for a newspaper then linger around the stacks of Daily News editions and New York Posts to catch up on neighborhood gossip with Joe and Mrs. Leibowitz. You might get updates about who died, news about a rent-controlled apartment being sublet for cheap, hear a joke, learn about someone's graduation, someone else's promotion. If you bought a new car, this was the corner to park and let regulars at Joe's, "The Neighborhood," ooh and ahh and maybe tease you a little bit: "A Jaguar, look at the big shot. Can I borrow a few dollars." "A Fiat! You mean a fix-it-again-Tony. Good luck!"

If it was a hot day it was the place to cool off at the magazine racks while getting yelled at - "What is this, a library." Egg creams were sipped at the formica counter lined with battered red stools. On rainy days neighbors would duck in, complaining about the weather, while shaking out umbrellas on the chipped tile floor. Damp newsprint filled the air on those days along with the scent of bubble gum, violet candies, rubber bands and everything else that made an old candy store feel so familiar.

In one way the corner of West 75th Street hasn't changed - it's still about communication. Today's version involves Verizon employees addressing your cell phone issues. A few decades ago it was Joe helping neighbors stay connected. Neighbors would leave messages for each other at the store and Joe made sure those messages were picked up. The old wooden phone booths in the back were filled with yellowed phone books and received a steady stream of crank calls but they also helped store patrons stay in touch. Someone might call to see if a friend was in the store. When Joe answered the caller would get a straightforward answer. If one of the neighborhood teens that made Joe's their hangout answered between rounds of playing street hockey, the caller would get an earful of silliness. Those boys - Joe, Louie, Jose, Meatball, Kenny, Jocko and more - loved, argued with, joked with and protected Joe Leibowitz and the old man returned it all with gusto.

The bartering system was alive and well along that strip of Columbus Avenue when Joe's Candy Store was around, a fact I discovered while helping my high school sweetheart fill in for Joe and Mrs. Leibowitz on occasional weekends. Simple things, like holding keys, providing change for laundry or holding that special parking space on the corner for a neighbor would be returned generously. Cheescakes from Miss Grimbles arrived with frequency as did gourmet sandwiches from the cheese shop a few doors down, pints of ice cream from the first Haagen Dazs in NYC, free t-shirts from a boutique on Columbus Avenue and an open invitation to borrow rollerskates any time from a sliver of a storefront next door.

Joe's Candy Store couldn't survive the commercial rent increases that gentrification brought to the Upper West Side in the 1980s. Efforts by Ruth Messinger, councilwoman for the Upper West Side at the time, were furiously backed by neighbors and fans of the Leibowitz's but in the end the store's rent jumped 300%. The Upper West Side lost it's last candy store and a neighborhood lost the simple little store that held its heart.
Posted by CityGirlWrites at 7:19 AM 6 comments:

A Little Rain, Much Architecture: The Highbridge Bronx Tour 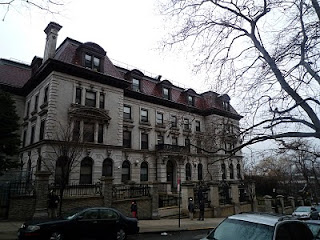 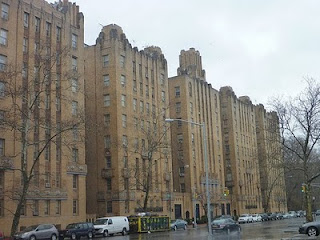 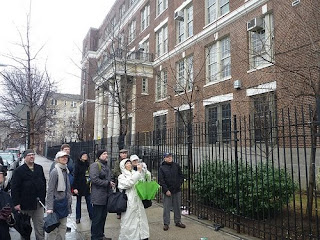 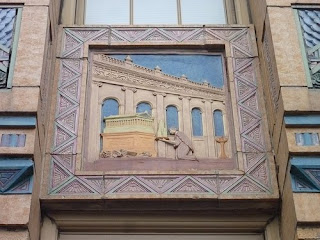 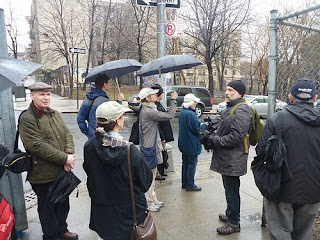 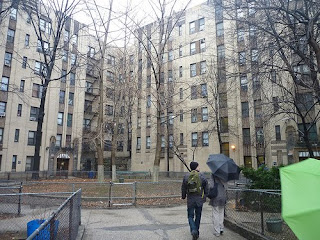 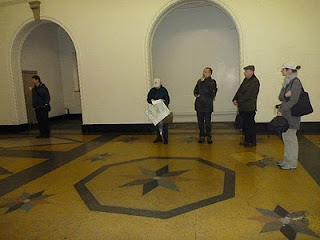 When was the last time you strolled in the rain around a Bronx neighborhood looking for architectural gems within a few blocks of Yankee Stadium? A group of 12 weather-proof preservation conference attendees did just that last weekend, basking not in the sun but in the company of likeminded "history buffs and detail geeks." William Casari, assistant professor at Hostos Community College and a Bronx resident, was accurate when he defined himself and our group as such. He led us on a tour of Highbridge in the West Bronx that offered a close look at a borough's past and present through the prism of architecture.

The tour included a stop at Macombs Dam Park, which is now the site of the new Yankee Stadium. Next, we enjoyed an informative talk about Jerome Avenue’s finest buildings then a visit to Park Plaza Apartments, a building rich with Art Deco details and Mayan motifs. A climb up Jerome Slope offered a panoramic view of Highbridge plus the opportunity to explore the area further.

Every step seemed to offer an architectural detail to capture in a photo or a nuance about life in the Bronx. A stop at a “step street” became even more interesting when a man at Diaz Superette mentioned that an out-of-control car had once launched down its full length, landing in a pile on the sidewalk below. At Noonan Plaza, a series of 7-story apartment buildings designed by Horace Ginsbern and Marvin Fine, residents carried groceries and children past a group of visitors talking about what seems like an ordinary building. In a window a little girl sat peering down at a bare quadrangle that once boasted a waterfall, a reflecting pool, swans and a Japanese-style bridge.

Several times, neighbors stopped to ask with curiosity what we were looking at then offered hospitality – by opening a locked door or by offering permission to enter a lobby. Local residents seemed unaware of the not-so-obvious treasures in their communities but Morgan Powell, a guest on the tour, is making an effort to change that: he leads walking tours in the Bronx especially designed to inform and inspire residents with updated local history.

The variety of architectural styles found on every street in Highbridge was a source of constant delight during the tour as was the element of surprise. Again and again, behind the facades of worn buildings, Mr. Casari would reveal elegant marble vestibules, Art Deco mirrors, antique signage, terrazzo floors and, in one case, the luxury of open space in a double height lobby.

Rain and high winds didn’t hamper 12 intrepid New Yorkers last week. Our enthusiasm was well-rewarded in a borough whose significance and beauty are frequently overlooked.

The following are images from that tour. Enjoy then visit hdc.org and bronxriver.org for details about upcoming tours and events.
Posted by CityGirlWrites at 8:26 AM 1 comment: