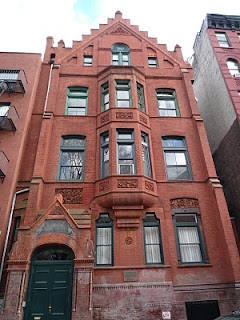 When Old St. Patrick’s Cathedral in Little Italy became New York’s first basilica last Sunday, all eyes, and camera lenses, were on the church but directly across the street stood an unassuming building that drew my attention. It turns out that 256-258Mott Street has an interesting past.

What is now a co-op building used to be known as the 14th Ward Industrial School. It was built for John Jacob Astor and his wife Charlotte in 1888 to serve, in the words of The New York Times over 100 years ago, “a district of wretchedness, poverty and squalor.” It became a school, run by the Children’s Aid Society, where impoverished immigrant children could receive daily lessons in “industry, thrift and cleanliness" along with hot meals.

The Astor’s bought the lot for $21,000, hired Calvert Vaux, the co-designer of Central Park, to design the building and paid $42,000 to have the Victorian Gothic structure built. The little red brick building on Mott Street became a safe haven for generations of children in a neighborhood that used to be part of the infamously violent Five Points district. Today its classrooms are residences and the building stands serene amidst cafes and boutiques.

Every one of New York's oldest buildings has a story to tell and each one seems worth repeating.
Posted by CityGirlWrites at 7:35 AM 4 comments: