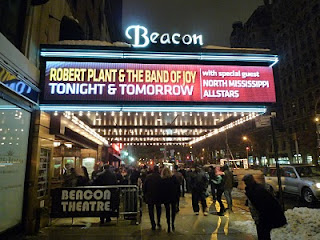 Robert Plant hasn’t left behind Led Zeppelin – he’s bringing the influences that fueled that once-in-a-lifetime collaboration into the present moment and racing forward with them in exquisite company. Plant and Band of Joy are on a quest to reach deeper and stretch further into all musical territory – a journey no music lover will want to miss.
Posted by CityGirlWrites at 3:52 PM 1 comment: