The Fight for A Philadelphia Gem

When you veer off into unknown territory you're likely to find the unexpected. That's exactly what occured yesterday as I left the commotion of a busy Philadelphia street to explore a charming little alley. Red brick townhouses framed by shutters and ivy lined a narrow brick cartway strewn with autumn leaves. The noise of the city fell away as if muted by years of history. I explored tentatively, wondering how residents in the area might react to a stranger photographing and gazing about the area. I found my answer readily in an informative flyer prepared for all who might happen by. 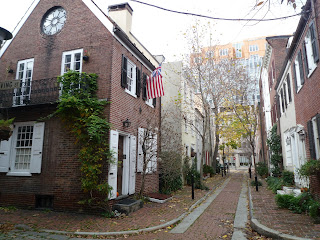 It turns out there is a power struggle taking place in that hidden little gem of a side street in Philadelphia - between residents who would like to see it privatized and those who believe that Irving Street, after 200 years in the public domain, should remain open to all. Since Irving Street was never put on the Philadelphia City Plan back in the 1800s, residents can easily move to deny public access. Instead, one small group of Irving Street residents has organized to protect the public's right to enjoy it. 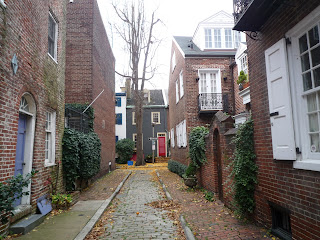 What incredible generosity that residents of this intimate space are willing to share it with others instead of gating it, hiding it from view and using it for personal interests as has been suggested. Some might argue that they are fighting against their own interests - afterall, they could eliminate potential nuisances like noise, litter and loitering just by closing it off. But the residents who have come together to form Save Irving Street see those issues simply as part of vibrant city life - problems that should not justify privatizing a historic street. This is where I want to stand up and cheer! Count me amazed by the residents of Irving Street and a big admirer of a tiny sliver of Philadelphia.

For complete details and updates regarding the future of Irving Street please visit http://www.saveirvingstreet.com/
Posted by CityGirlWrites at 6:37 AM 1 comment: