Haddonfield Reveals an Artist in Bloom

If you love art and you delight in making new discoveries, New Jersey’s Markeim Arts Center is where you will want to be on the evening of April 16th. Art lovers from across the region will gather in historic Haddonfield that eve to see the work of an artist revealed for the first time. 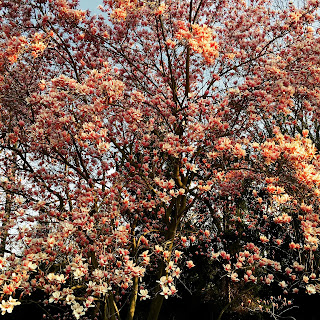 During a catered cocktail reception that will serve as a fundraiser for both the Markeim and the Rotary Club of Haddonfield, guests will have the opportunity to meet artist Mike Bloom and see first-hand how retirement from a successful career in architecture has translated for him into a creative storm of dynamic design in wood, stone, metal and on canvas.

From Retirement to Renewal

Mike Bloom creates daily with the same passion he brought to designing large-scale buildings during his 40 years as an architect. Off a quiet street near Haddonfield, only moments away from traffic lights and parking lots, he works in a sanctuary of art, color and light where sun streams in from every window and jazz fills the air.

“I’m retired - that means instead of working 15 hours a day I now work 10 hours a day. Well, lately more like eight,” Mike says with a smile and a shrug. 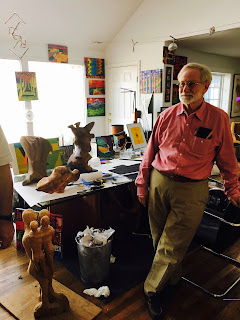 Evidence of his dedicated approach to creating is everywhere in his bright studio. Paintings line the walls and floor. Jewelry in the making rests on a table. Sculptures stand throughout the space. Asked how many creations he has made over the past five years he says, “If you count, you lose. I rather not know.”

A visitor in his studio reaches for a miniature sculpture he has just crafted out of stone. “Aha, if you reach for it, I’ve won! It’s tactile!” It turns out the piece is an abstract representation of birds made to be experienced by anyone blind or vision impaired.

His architectural skills allowed him to reconfigure an entire house to suit his needs for a large work space. 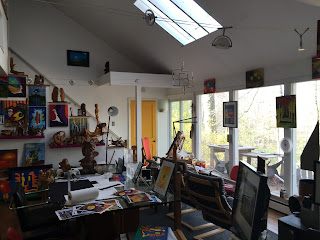 He opened up walls, slanted ceilings and added skylights of his own invention: his “Sun Tubes” magnify daylight and work in conjunction with a circle of LED lights that power up when natural light is weak. The fact that these tubes now also illuminate schools in blighted areas in New Jersey is a source of great satisfaction for him.

When he first began painting only five years ago he says, “I didn’t know anything.” Reading, observation and repetition brought him to the point where he is now - receiving accolades and being asked to show his work.

“Landscapes are literature - they tell you all you need to know,” he says, explaining why he prefers abstraction to something more straightforward in his work. “Abstracts give you questions and reach inside your mind.” 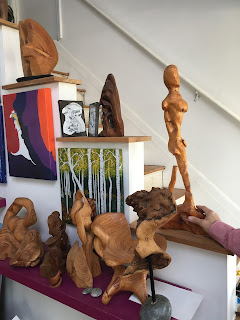 His art reflects a layered sensibility. Walk the exhibit at the Markeim (on now through April 30th) and what you will discover are bold landscapes depicted in vibrant colors contrasting with canvases covered with shadowy figures expressed in subtle hues. You will find joyful, swirling creations in wood alternating with jagged works in stone and metal that seem to communicate loss.

“This whole thing is an out-of-body experience for me - the upcoming exhibit, realizing how many pieces I’ve made over the past few years, being interviewed…all of it.”

Before he ever thought about dedicating serious time to art, Mike created his first public work - a powerful anti-Iraq War display in front of his Haddonfield office: he added one American Flag to a display for every soldier killed in battle overseas. The number of dead, he says, were not being accurately reported. He was so committed to the project that he called Dover Military Base every week to get a count of the caskets that arrived. He had military support for his project but not necessarily local support - his display was torn down. A general from Fort Dix flew to Haddonfield to help restore it.

Considering how self-deprecating Mike is, it’s no surprise that the item he treasures most in his studio was made by someone other than him. It’s a collage of his anti-Iraq War project that a supporter created then dropped off anonymously at his office one day while he was out.

“Are we just mean?” he wonders about humans in general as he points out “The Homecoming” - a sculpture he created with no arms, no legs and “totally maimed, like our soldiers.”

Mike’s focus on suffering coexists with a lively sense of humor and an interest in ideas that range from philosophy and physiology to quantum physics - topics he discusses among friends during the salon he has been holding weekly at his studio for seven years. 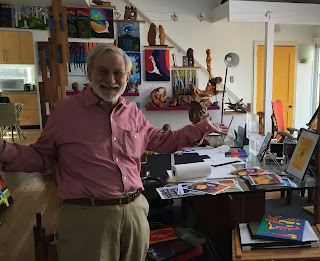 Always thinking, contributing, creating - that is how Mike Bloom has chosen to move through life. That approach is now the signature of his retirement. After decades woking in “an art form of constraints,” as he describes architecture, this 52-years-married, 40-year active member of the Rotary Club of Haddonfield is designing freely - crafting a new life for himself as a talented, prolific artist and creating new experiences for those few people who have already encountered his work.

Purchase tickets online at markeimartscenter.org, by calling 856-429-8585 or by contacting Gerry Nanos of the Rotary Club of Haddonfield at hgnanos@gmail.com. Price: $30 each or $50 per pair.

Posted by CityGirlWrites at 10:54 AM No comments: