An astonishing sight looms ten-stories above North Philadelphia. The building is abandoned, broken, marred by graffitti yet majestic. 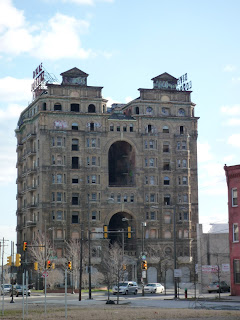 In a part of the city where dilapidated buildings are part of the urban landscape this building stands apart. It commands attention. The winds that blow through its hollows whistle the tunes a different era, hinting at stories that wait to be told. 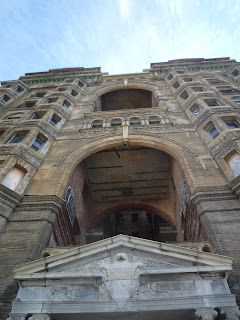 This broke-down palace first came into being as the Lorraine Apartments in 1894, one of Philadelphia’s first high-rise luxury residences. It was designed by Willis G. Hale, a controversial figure criticized for his overly-flamboyant taste and best known as the architect of “Philadelphia’s ugliest building” - a mysterious, neglected structure that haunts Center City to this day.  The Lorraine was converted into a hotel by the Metropolitan Hotel Company in 1900, attracting wealthy clientele through 1948. 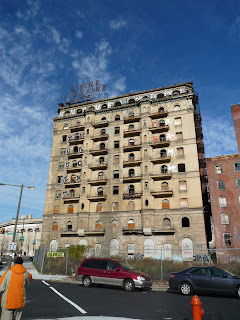 While the Lorraine was running as a whites-only hotel in Philadelphia for five decades a cult was growing in Harlem around George Baker, the charismatic son of two former slaves. Wherever George Baker went to preach his positive thinking sermons, believers flocked and sex and money scandals followed. 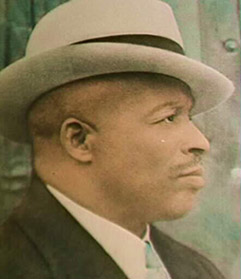 Dione Wilson/FindAGrave.com
By the time he changed his name to Reverend Major Jealous Divine his preaching had developed into a belief system with a name, the International Peace Mission Movement. He had declared himself God and his notoriety had grown well beyond New York City. Songwriter Johnny Mercer attended a sermon entitled “You got to accentuate the positive and eliminate the negative” and later credited the sermon as having inspired one of his best-known songs. It was in 1948 that the Lorraine and the Divine linked. That’s when the International Peace Mission Movement bought the hotel for $485,000 – all cash donations from the Reverend’s followers. 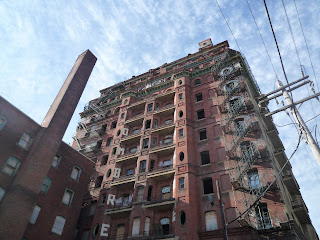 Photo by Maria Gorshin
Reverend Major Jealous Divine quickly became a hero to black and white families in Philadelphia who struggled with poverty, racism, and drug addiction. His sermons inspired believers to find strength and his open-door policy made all feel welcome. He provided his followers with jobs, free food and affordable housing and made sure North Philadelphians always had a place to buy a cheap meal. On the hotels’ top floor, where Philadelphia high society had long gathered for social events, Divine presented free banquets. People from the surrounding community were invited into the grand lobby to buy meals for pennies. 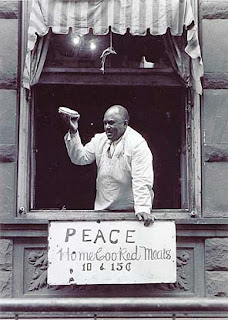 Quebecoise/FindAGrave.com
By the time he attached his name to the roof-top sign on the building, the Divine Lorraine had become the first racially-integrated hotel in the United States. Later, as North Philadelphia shifted from prosperous to poverty-stricken, Reverend Divine’s building served as a beacon of hope in the area and his sermons began to promote equality, desegregation and anti-lynching legislation.

So how did the Divine Lorraine fall into such tragic disrepair? By 2000, the 246-room hotel was due for extensive and cost-prohibitive repairs. It was sold to a New York developer but the building sat unused and unrestored for six years. During that time, David Peace, a member of the International Peace Mission Movement since 1953, lived in the building alone, lovingly tending to it and protecting it from the elements as best he could. 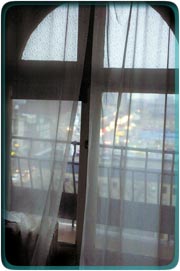 MichaelTRegan/CityPaper
The Divine Lorraine was listed on the National Registry of Historic Places in 2002. In May 2006, real estate developer Michael Treacy, Jr. purchased the building and formed a development team to oversee its use. He assured the historical integrity of the landmark would be preserved and presented plans for 135 condominiums and a restaurant. Instead the interior of the building was scavenged for everything from marble and alabaster to radiators and old mattresses. Afterward, it was left abandoned, windows shattered, the interior exposed to the elements. Today the building is undergoing a process that has been described as "demolition by neglect" - a tragic potential end for a community's icon of promise.
Read this article in its entirety and view additional photos of the Divine Lorraine at Untapped Cities: http://bit.ly/tvVoGC